Forest Machine is heavy equipment that helps work in the forestry sector with a high level of productivity. The 548 is designed by Caterpillar by prioritizing superior engine quality and hydraulic technology. Then with the collaboration between work tools, a machine that is integrated with superior hydraulics, it can reduce the incidence of power loss so that the resulting performance is very maximum and efficient. Moreover, it helps with a hydraulic pump which can lower rpm when the tool can help the process increase in performance to be achieved. In addition, the combination of hydraulics with other 548 workers is also very good because it makes the work tool function work faster and smoother. Other hydraulic features that make fuel efficient with low oil flow are hydraulic valves with strategic placement of components. 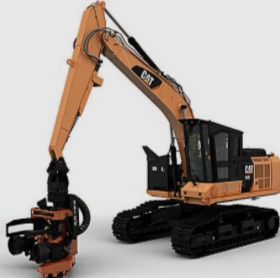 Associated with the superior engine used in the 548 is the Cat C7.1 engine which is known for its hydraulic horsepower capable of working under heavy loads with implement performance resulting in greater production. Coupled with the use of U.S EPA Tier 4 Final technology which makes the stability of the idle speed operation is always high without the need to spend a lot of fuel. It can even save up to 28% fuel and still deliver peak productivity through optimization of hydraulic power. In achieving this peak productivity there are still many other supporting factors such as an increase in swing torque by around 19% so that the reduction in log shovels by the operator can be more efficient through the General Foresty configuration so that when the tree moving process gets additional power, then there is also a new cooling package which aims extends component life by increasing flake flow with a cooling capacity of about 12%, etc. 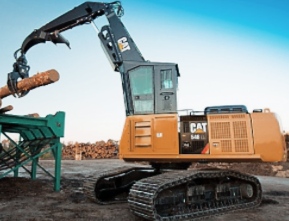 With the various improvements to its components, the resulting performance will be maximized. Maximum performance results are also of course obtained with maximum performance time with longer operating time and this can be overcome because the 989 L counterweight fuel tank is available. The structure of the 548 is specially made and very sturdy starting from the upper frame, gusset. extra, there is a linkage configuration, as well as a carbody with a width and height that has been adjusted from various considerations. In the design there is also a large pitch of up to 216mm and is associated with an alternating cooling fan which keeps the temperature of the fulide at optimal levels even though the conditions of the task at hand are very tough. In addition, there is also one component that strengthens this 548 engine, especially for heavy duty covers, namely the provision of thick doubler plates.