In general, motor graders manufactured by Caterpillar have many excellent features that can increase productivity without having to spend a lot of fuel. The motor graders that will be discussed this time are type 150 which contains an eco-mode in it so that fuel will be more efficient up to 10% with a base power of 200 HP. The machine he uses is a Cat C9.3 engine which is able to adjust the grading speed so that it is always consistent so that the results obtained will be maximized. In addition, the latest engine technology can also minimize the emissions released by this 150 and has reliability for a longer service life because of its ability to maintain optimal performance. In addition to these machines, there are also other machines that are used to extend the life and use of this tool, namely the idle shutdown timer machine which is activated when the machine has been working for too long so it requires a break for a while.

Motor graders that have an operating weight of up to 43950 pounds are also equipped with an All-While Drive (AWD) which is able to maneuver the machine so that it can operate in various location conditions, so sometimes these machines are also called Motor Graders 150 AWD. Not only that, the presence of AWD can also help traction which also affects the ease of operation of the operator. The joystick control is often considered as a substitute for the lever because it makes it easier for the operator to adjust it so that the fatigue of hand and arm movements can be reduced by up to 78%. The joystick on this 150 AWD consists of right and left joysticks with different roles, on the right joystick plays a role in controlling the drawbar function to the electronic throttle, while the left joystick plays a role in controlling the steering to the left moldboard lift cylinder. The joystick control is designed for operators to make it easier to control their movements safely and certainly more efficiently. 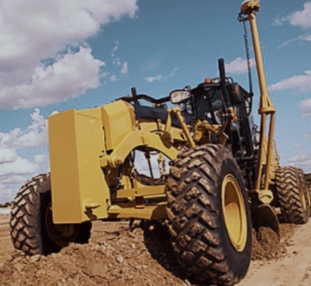 In addition to the joystick control design, there are many other designs that are specifically applied to this 150 AWD in order to create convenience and comfort for the operator, because convenience and comfort greatly affect the performance of the machine. As there is HVAC which is a Heating Ventilation and Air Conditioning System that is able to help the air to stay fresh through its work in circulating air properly, so that the humidity of the air can be reduced and even dust is sealed so as not to contaminate the air in the room. The updates to the operator's seat are facilitated with soft cushions and heated/cooled, as well as a tilt up to three positions that make it easy for the operator to operate this 150 machine. In addition, this machine also produces horsepower with the best torque based on the configuration in certain applications through the presence of one of the right joystick controls, namely electronic throttle control so that it can assist the machine in producing maximum productivity.