Electric Rope Shovels 7495 with Rope Crowd is a tool that contributes to increasing productivity in the mining world by adding the status quo so that the electric shovels that are built will be more challenged to be better among them. There are several bases that support the advantages of this machine, namely more perfect maneuverability, reliable consistency, and longer component life. In an effort to extend the life of these components, rollers are installed on the straddle so that component wear can also be increased simultaneously. There are also crawlers on this type of electric rope shovels that have been tested in increasing mobility so that later the digging will be easier and deeper. In addition, the bottom rollers on the 7495 are designed with features to withstand the single point ground reactions that would occur in the event of unevenness on the pit floor. 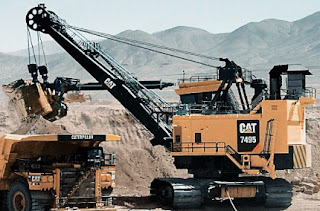 The function of this type of electric rope shovel is the same as the electric shovel in general which is in charge of removing ore and coating in the work area. But the difference lies in the features that support it and the specifications of this 7495, where this type of shovels has a working weight of up to 3056000 lb with a timba capacity of around 30.6 to 62.7 m3. With these various supports, not only productivity can be increased but also along with an increase in profitability This performance increase is also assisted by a comfortable design for the operator, starting from the spacious cabin, low vibration, installing isolators under the cab that can extends stability in the engine room, until the new Hall Effect is ergonomically easy to use with just a touch of a finger on spring tension. 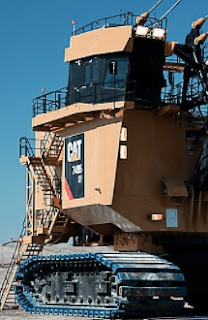 The safety of the 7495 electric rope shovels with rope crowd also does not need to be doubted, because besides the sophisticated cabin, this type is also designed with double doors that make it easy to get out of the room, especially in case of an emergency such as a collapse and so on, the operator can exit the cab very quickly through the double doors. So that safety is also a priority in the design of this machine, as in other efforts such as an increase in the operator's line of sight which is directly directed to the five overhead monitors so that it is more efficient, and these things also minimize the occurrence of accidents during an emergency or not. Other reliability is also found in the heavy duty refrigerator which is able to withstand the vibrations of the shovel from being excessive and even very low, while to reduce noise is carried out by a special cabinet whose main task is to eliminate the sound generated when this machine is moving.

at April 21, 2021
Email ThisBlogThis!Share to TwitterShare to FacebookShare to Pinterest
Labels: Machine