Sany Container Gantry Cranes generally have almost the same characteristics in each type, from the new torsion anti-sway system, the new torsion anti-shake system, the soft landing of the spreader to the container, intelligent gantry repair technology, and so on. One type of container gantry cranes produced by Sany is Rail-Mounted Container Gantry Cranes. This machine is a machine that was developed from the previous product, which means this machine has better capabilities because there are also several features added in it. One of them is the anti-wind anchor system feature which has a role as a counterweight to all heavy equipment or also said to be the stability of the machine. With its reliability, this feature has several different devices according to its job, including a reverse torque holder with four sets of ropes, an independent holder with two sets of devices, and a blow arrestor with four sets of wheel clamps. 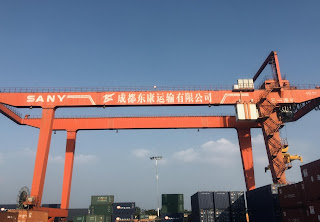 These Rail-Mounted Container Gantry Cranes only consist of three models, namely RMG5508, RMG5530S, and RMG5540S. The three models included in this machine category have a hoisting capacity under spreader range of around 10-65T, a rail span ranging from 15 to 50m, and a hoisting height of about 9.5-21.1m. These models also have features that are able to withstand pollution from higher harmonic voltages to the network, so that the power factor of the equipment can be further increased. Apart from these advanced technologies, there is also a compensating capacitor with a relatively low voltage but is smart and can reduce cable consumption. The performance of this feature is through fully automatic resonance which allows the adjustment of reactive power to average about 0.9 or more to improve electrical efficiency. 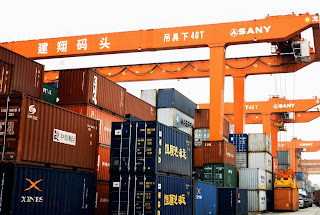 High quality welding is also needed to make it look tidier and stronger, which requires a preparation process in the form of applying bevel cutting, bending and material processing. Not only that, in order to better guarantee this, steel pretreatment is needed. The welding cycle carried out is the semi-automatic car H-beam which consists of several stages such as the retaining rod system and the M-house base which is able to shorten up to 30%. Then launching of the assembly line by heavy port machines can also shorten the box beam welding cycle by up to 15%. In addition, this machine is equipped with layers and pressembles that provide various components to help improve production quality.

at January 06, 2021
Email ThisBlogThis!Share to TwitterShare to FacebookShare to Pinterest
Labels: Machine